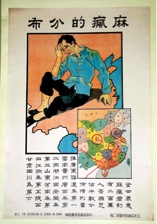 Visualizing the Geography of Diseases in China, 1870s-1920s

From John Snow’s map of the 1854 London cholera outbreak to the World Health Organisation’s current attempts to map the global spread of malaria and bird flu, maps have long been used to visualize medical knowledge and regulate population responses to infectious diseases. As Marta Hanson, Associate Professor of East Asian Medicine, Department of Medicine, Johns Hopkins University, demonstrates this was just as true in colonial China as in other health settings. Drawing on an extensive collection of Chinese disease maps dating back to the twelfth century,  this workshop  will trace the transition in the visualization of the geography of disease in Chinese medical practice and also demonstrate how such maps became graphic illustrations of the major transformations wrought on East Asian soil by Western biomedicine. Hanson argues that the earliest Chinese disease maps were largely analytical tools for visualising the relationship between space and disease. In 1870-1920, however, they were gradually transformed into ‘technologies of power that legitimated quarantine measures and other forms of social control’. The result was that by the time of the 1921 plague epidemics, such maps had become tools of British colonial power and a means to convince a wary Chinese public of their place in a newly globalizing world.

Marta Hanson is the author of Speaking of Epidemics in Chinese Medicine: Disease and the Geographic Imagination in Late Imperial China (Routledge, 2011). In addition to being an expert on the history of epidemics in China, her research encompasses Chinese arts of memory related to hand mnemonics; and the social, cultural, and intellectual history of late imperial China.

Attendees should register their interest by emailing Mark Honigsbaum